I had the incredible privilege of being able to sit in a short and informal running clinic, run, and then hang out with Sean Burris and Barbara Parker last night at our new running store (YES!  hope they make it!) in Albany (Wild Side Running).  Sean is a shoe rep from New Balance and is a 28:xx 10K guy and former runner for FSU.  He won the Atlanta HM in 2011 as well as tons of other accomplishments.  His coaches his wife Barbara, who is an Olympian for Britain in the steeplechase (2008) and steeplechase and 5K (2012).

Both of them we SO awesome to all of us.  We may not amount to a hill of beans to anyone or anywhere else in the world, but there are a few of us here that are pretty passionate about running - we showed up to the shoe store and he did his clinic and then offered to go on a run with us, letting us run in some test shoes that he had - the New Balance 890v4 (which was a really good shoe).  Although that is part of his job I guess, he hung out with our small group for a long time afterwards and had tons of stories and has met tons of top runners.  Barbara was about 3 months pregnant and didn't run, but took a bunch of time with a few timid new runners - she totally was awesome with them and didn't act at all like an Olympian could of - totally class act.  She chatted about her Olympic experiences with us and both of them answered about 10,000 questions from us (I probably asked 5,000 myself).

In a small (runner-wise) place like this, that was a pretty big deal to a few of us.  It was obvious that both of them were fueled by an honest passion for running and were both just really good people.  Just wanted to share that - not many sports where your average knucklehead such as myself can hang out with elite and even Olympic athletes like this and have such a positive experience.  Running and the running community is awesome! 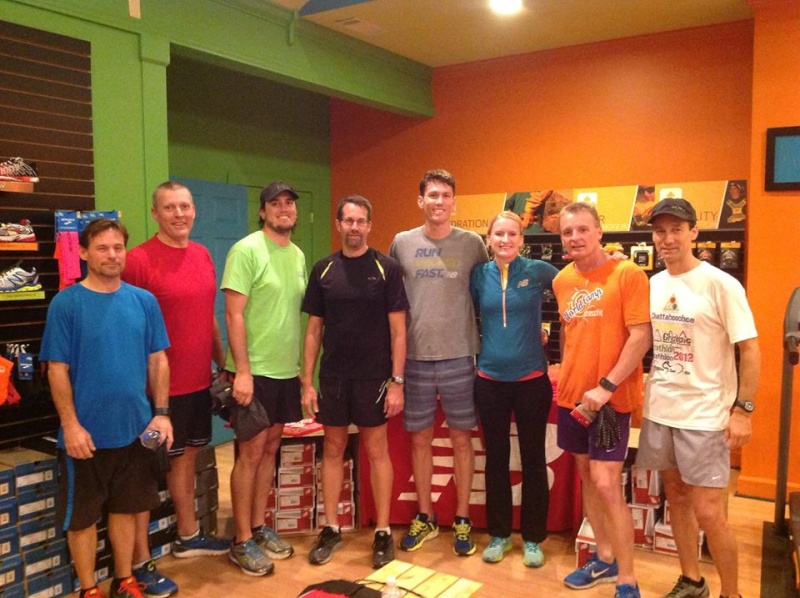 " />Sean is the tall guy in the middle.  The rest of us are all buddies that are pretty slow, but work pretty hard and are all big dreamers....

looks like fun.  Learn anything that's gonna know 10 min off your time?  Those shoes fast?  Amazing how you guys didn't move an inch for the 2nd picture!

Haha Michael - after a couple of years, it still confuses the heck out of me to try and post a picture.  The shoes I was not impressed with and I got no real sage advice - just impressed with someone taking the time to talk to some lowly piddlers from South Georgia!  I know how to take 10 minutes off - stay healthy!  Don't know if I can manage it though:roll:

Very cool! I hope you can figure out staying healthy. I agree it makes a huge difference. Happy Thanksgiving.