Right now, I have a pair of Brooks Green Silence that I have worn for 3K to 26.2M.
The Brooks Green Silence are at the end of their life. The cushion is almost gone under the ball of my foot and big toe. The shoes have some training mileage, and 25 races (about 200 race miles).

I'm considering the Nike Zoom Streak XC 3 as a 5K-10M shoe. Any thoughts on the fit of this shoe?
Any thoughts on a 1/2-Marathon shoe available by October? 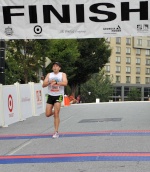 I would recommend the Mizuno Ronin or Musha...

Not a fan of Mizunos. The "Mizuno Wave" just doesn't work for me, they feel clunky and hard to me.
The only reason I have the Precision 11s is that they were $30.

If these ( http://www.runningwarehouse.com/descpageMRS-MUNI4M1.html ) didn't have the "Wave" I might check them out.

I wish the running stores around here stocked more than just 3-4 flats.

@Gobbles wrote:Not a fan of Mizunos. The "Mizuno Wave" just doesn't work for me, they feel clunky and hard to me.
The only reason I have the Precision 11s is that they were $30.

If these ( http://www.runningwarehouse.com/descpageMRS-MUNI4M1.html ) didn't have the "Wave" I might check them out.

I wish the running stores around here stocked more than just 3-4 flats.

Yeah, they still do...They are a little too minimalistic for me. 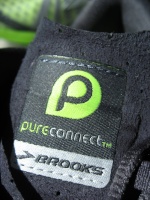 I would have to agree with Tim on the T7. Gobbles I have been racing marathons in the T series since Boston 09. I just love racing in the shoe.

I do like Nike but be warn that if you have wide feet the shoe will fit very tight in the toe box. I know that Dave-O has raced in the streak so I'm sure he can give you a good review on that shoe.

Also if you are looking at the streak why not take a look at the Spider. Again I know that Dave just raced his 5k in those and can share some light on the shoe. I did ask him if he though he could run a marathon in them and he thought so.

Another shoe maybe to look at is the Adidas Adios - have never raced in it but really love running my tempo runs in the shoe. Plus the it can't be that bad of shoe since it was the shoe that was worn in Boston this year to set the world's best marathon time.

Again if you like Brooks I think you would love the T racer. I say T because you can still find the T6's for really cheap. The only thing that I really noticed between the T7 and T6 is the lacing system. Other then that everything else with the shoes seems to be the same.

Ended up buying Brooks T7 Racer.
Limited choices around, but the T7's were the best I tried.

Page 1 of 1
Permissions in this forum:
You cannot reply to topics in this forum
Latest topics
» Term Limits?
by Mark B Yesterday at 11:09 am